In an effort to bring something a little different to the site, I thought it’d be fun to do some creative writing. I’ve not really done this before, so it may be rubbish. I got the idea from a tweet I saw earlier in the week, from Start with This, a podcast about writing by the same people behind Welcome to Night Vale, which is another podcast I thoroughly enjoy.

So I went ahead and generated some random sentences. 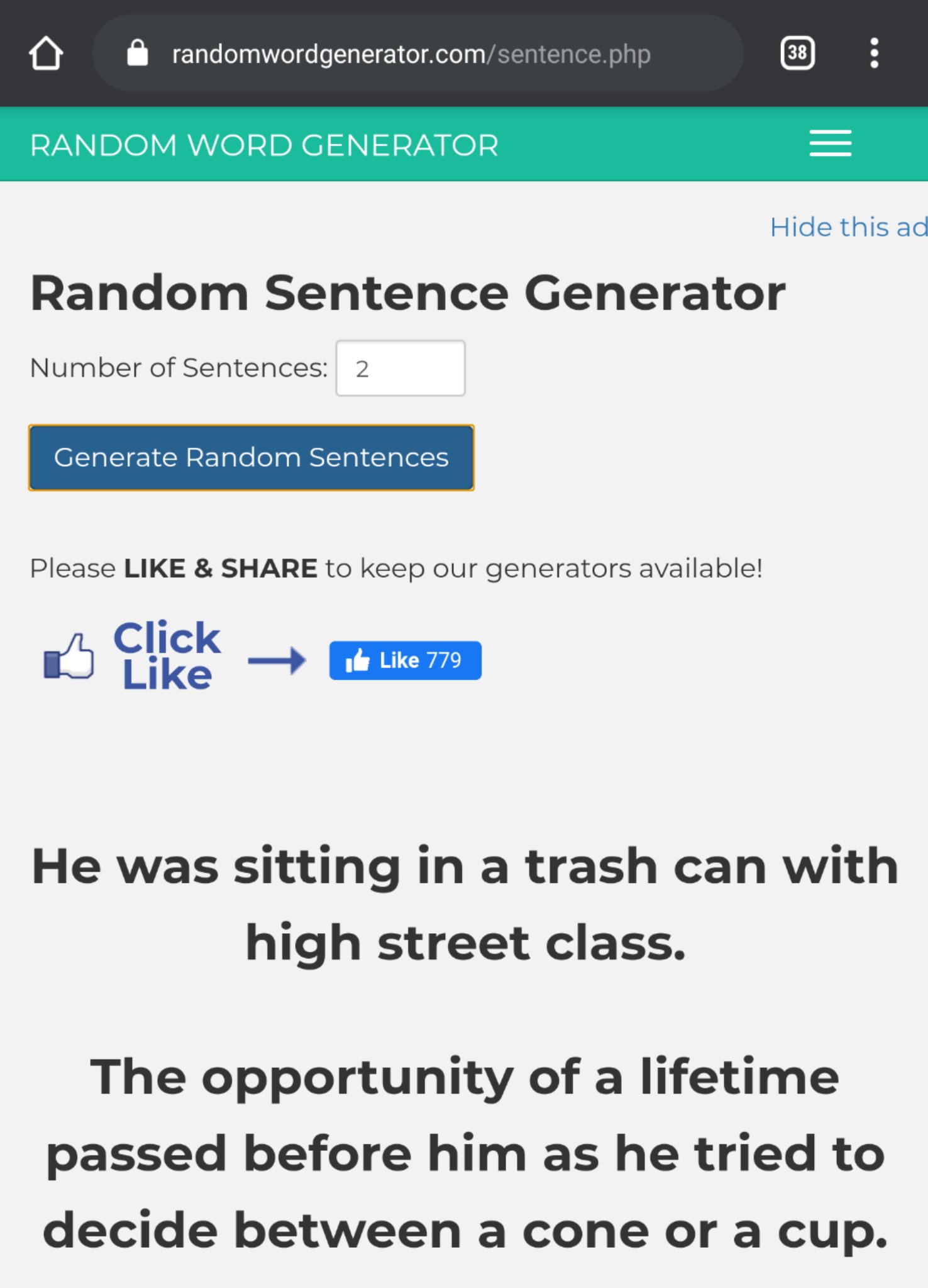 I don’t know how this is going to go, but, luckily for you, you can just keep scrolling and see the results. Very short story begins …now!

He was sitting in a trash can with High Street class. The opportunity of a lifetime passed before him as he tried to decide between a cone or a cup. Who knew going for ice cream could be so eventful?

He never thought he’d be in this situation again. How many times has anyone else ever gone out for dessert, just to find themself hiding in a trash can? Can others also form a top-ten list of garbage bins they’ve seen from the inside? This particular can may be number one on that list, though, so that’s something.

It’s called High Street for a reason. Was it named that after high society took over the area? Or were they drawn to it for its name? That’s a chicken-and-the-egg paradox to ponder later. But it’s definitely the cleanest area in town, and they don’t neglect the trash cans in that cleanliness. Of course, there’s still a faint odor, it’s a garbage can, after all. There’s no sticky residue, or other mystery goo stuck anywhere, so a faint odor is tolerable, given the circumstances.

Speaking of circumstances. Though he’s been in a bin before, at least the events leading up to this time were different. While standing in line, waiting patiently for the family ahead of him to pick their flavors, a thought occurred.

“I think I’ll do cookie dough and peanut butter tonight.”

Wait, what? No, no, not that thought. Isn’t it clear by now the thought I’m referring to is the impetus for this entire story? Why would that thought be the one that made you dive into a trash can?

“Well I don’t know, YOU’RE the one writing it.”

You know what guy, just calm down, bear with me, here. You had a thought AFTER that, remember? It was just as that boy in the blue shirt, with the red shoes, he wanted to try a THIRD flavor, as he couldn’t decide. Stop interru…

“OH! Right. I thought, with that shirt, and the shoes, and his hair was kinda spiked up, he was like if Sonic the Hedgehog was a person.”

What? No. I didn’t even know you thought that, and you’re wrong, he looked nothing like Sonic. Can I get on with this? I’m sure there are folks paying attention that are very curious as to how you went from standing in line at a posh ice cream parlor, to hiding out in a trash can.

“Sorry! I just thought that, you know, if you’re talking about my thoughts, maybe I should participate. Of the two of us, who would know better what’s going on up here?”

Quit tapping your temple like that. That’s loud. And also, I WOULD KNOW. It’s called third-person omniscient for a reason.

“Ha! I bet you can’t even spell omniscient.”

I literally just did. Twice.

“Oh, ok, Mr. Smart Guy. Also, it sounds like you’re doing second person, not third person. Not so smart after all.”

No, wise guy. I’m using pronouns like “he” and “his”. These are third-person pronouns. If I was going for second person, I’d say “you” and “yours”.

“Sorta rude that you assume I prefer the male pronouns. It’s 2020, man, you can’t just assume pronouns based on what you perceive my gender to be.”

It wasn’t an assumption. Again, OMNISCIENT. I know what you prefer. And that’s a pretty terse comeback from you, who has yet to ask about my pronoun preferences, yet has referred to me as “guy” and “man”, even though I have no physical being on which you can base such an assumption.

“Well, to be fair, I don’t often interact with omniscient beings. Most of my friends are guys, so I default to that vocabulary.”

I know this. I just wanted to point out your hypocrisy in bringing up the gender issue.

“Well thanks. I guess I’ll try to do better.”

Super. Let’s get back on topic here, people want to know why you’re in that trash can.

“I don’t think they do. In fact, I bet you don’t even know. All these claims of omniscience, yet you let me, a guy who has found himself in a trash can more than a fifteen times, derail your story.”

How dare you! I will not stand for such an accusation. Wait, more than a fifteen times? I only knew about like ten. What is going on with you? Nevermind, I don’t need to prove my omniscience to you. I’m gonna go narrate someone else’s life.

Hey, thanks for reading this far.  What you just read was attempt number two at doing this. I got quite a bit into attempt one, then just decided I didn’t like it.  I almost scrapped the whole idea.  But I’m glad I pressed on.  What came out was a very silly little thing.  There’s no point to it, but the exercise was worth while.

It’s fun to work outside your comfort zone, especially in a media you don’t even create in.  But whether it’s writing, woodworking, baking, if you’re trying to create something, but don’t really know where to start, try focusing on the restraints. Let those guide your creative process.  In this case, if I were going to sit down and just write a very short story like this, I have zero idea what I’d have started with.  But, having those two sentences at least gave me a path I could start down.

I would be very interested in reading any more stories started with a random-sentence prompt. If you take a stab at it, feel free to share it with me!  Comment below with a link to it, or email it to me if you don’t have a spot you can post it. Maybe I’ll feature one or two in an article soon.

Whatever you do, use your bear hands for good!